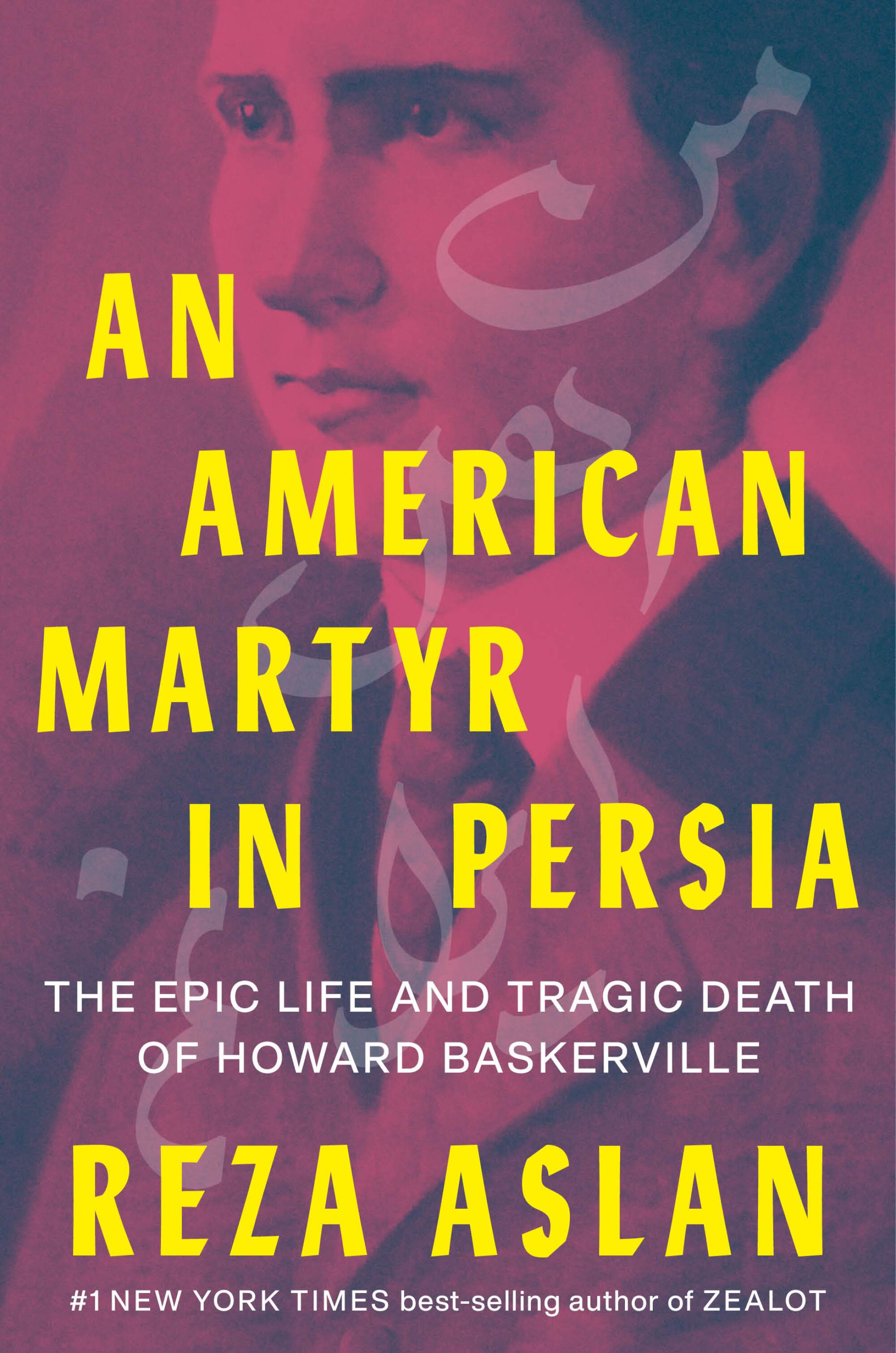 An American Martyr in Persia: The Epic Life and Tragic Death of Howard Baskerville

If you buy books linked on our site, The Times may earn a commission from Bookshop.org, whose fees support independent bookstores.

Lunching on chelo kabab at Sholeh in the section of Westwood commonly called Tehrangeles, Reza Aslan doesn’t look like the kind of guy who gets death threats. But that is exactly why our interview won’t be followed by a book-tour homecoming. A major event scheduled for the following day at the Wallis, meant in part to promote his new book, “An American Martyr in Persia,” had been canceled, along with an appearance planned for the previous week at Stanford’s Center for Iranian Studies.

The fact is that Aslan, a religious scholar, author of the Jesus Christ biography “Zealot” and host of the bygone CNN religious travelogue series “Believer,” is used to receiving messages calling for his demise.

“I have a 20-year career of making enemies,” he says with a shrug. “I’ve been sent death threats by Muslims, Christians, Hindus, atheists, Republicans. When you write about religion and politics, that’s the world you live in. But this is different; it’s the first time I’ve been sent death threats by my fellow countrymen. We’re on the same side. It really is demoralizing.”

Iran is in the middle of a tumultuous autumn as the fundamentalist regime faces its strongest opposition in decades. But threats against Aslan are not coming from the government — at least not directly. He blames the missives on a disinformation campaign that paints U.S.-based progressives like himself, who criticize blanket sanctions and military intervention, as regime supporters. As for who might be behind the recent proliferation of toxic bots and social media accounts relating to Iran, Aslan is sure of only one thing.

“The only one who benefits is the regime,” he concludes. “They have to have the diaspora in disunity and chaos, especially among people with a public voice like mine.”

Author of five books on religion, Aslan immigrated with his family to the Bay Area following the revolution of 1979, which shifted power from an autocratic shah to radical clerics. He holds a bachelor’s degree in religious studies from Santa Clara University, a master’s in theology from Harvard Divinity School, a master’s in fiction from the Iowa’s Writers’ Workshop and a doctorate in sociology from UC Santa Barbara.

Many know him from “Believer,” which was canceled in 2017 when he and CNN parted ways after he called President Trump “a piece of s—” and a “man-baby” for his response to the London Bridge attack.

Numbering roughly 700,000, the diaspora in Southern California is the largest population of Iranians outside Iran. Many from the first generation tend to be well off, conservative and hawkish on U.S. foreign policy. The second generation, including Aslan, tends to be more progressive and highly assimilated. Most vexing of all, however, is the Mujahedin-e-Khalq (MEK), which Aslan describes as “a violent Marxist cult.” Formerly on the U.S. list of state-sponsored terror organizations, it has, through political donations, “managed to infiltrate the political right in the United States and set themselves up as the government in exile.”

This push and pull among exiles plays out against a backdrop of a potential revolution fulminating in their home country. In September, the death of 22-year-old Mahsa Amini after her arrest by the morality police for wearing a hijab improperly was the match that lit up every corner of Iranian society, resulting in unprecedented instability.

Earlier waves of protests — for instance over corrupt elections in 2009 — “were fighting for changes, for reforms,” says Aslan. “Gen Z has no interest in fixing anything. They want to burn it to the ground and start all over again, and they are uncompromising. You’re talking about two sides that refuse to compromise. It will end in violence.”

And so it has for greater than a century, as Iran struggled first in opposition to repressive autocracy after which in opposition to excessive theocracy. It goes as far again, a minimum of, to the interval lined in Aslan’s new e-book, a nonfiction account of Howard Baskerville, a younger missionary from Nebraska despatched to Iran in 1907, the place he grew to become embroiled in a nationwide rebellion.

On the time, a rash of anti-authoritarian revolt was spreading globally and Iran’s chief, Mohammed-Ali Shah, discovered himself confronted with a constitutionalist rebellion. To the north, Nicholas II of Russia had simply put down a revolution in 1905 and was useless set in opposition to related unrest on his southern border with Iran. His recommendation to the shah was to right away dissolve parliament.

In Tehran, the shah managed to silence the protest. However the nation’s second-largest metropolis, Tabriz, dug in for a siege. Lastly, when his expensive pal Hassan was killed within the spring of 1908, Baskerville may sit quietly not. In opposition to the coverage of the U.S. authorities, he put down his pen and picked up a rifle. Constitutionalist chief Sattar Khan acknowledged the worth of an American becoming a member of the trouble and shortly elevated him to his quantity two.

“This revolution had been begging the American government for support and help for years and they couldn’t understand why that help wasn’t coming,” says Aslan, including they felt a kinship with Americans who had equally thrown off a king’s yoke. “Having an American finally fight with them, they knew it would get attention.”

Russia despatched advisors and army consultants to Tehran to assist the shah; the British, in the meantime, nominally supported the constitutionalists — who succeeded in forcing reforms. A couple of months later, nevertheless, got here the Anglo-Russian Conference, an settlement to divide up the nation’s sources whereas propping up the shah and dooming the reformers.

In 1953 outdoors interference was once more instrumental in thwarting democracy; the U.Ok. and the U.S. engineered a coup d’etat to overthrow duly elected Prime Minister Mohammad Mosaddegh. His nice sin: a plan to nationalize the nation’s profitable oil business, slicing Western powers out of income.

“When you look at the 20th century history of Iran, it is essentially all about foreign interference,” notes Aslan. So when the Iranian authorities attributes authentic demonstrations to outdoors influences, it is likely to be an apparent lie — however it’s a believable one.

After lunch in Tehrangeles, Aslan rushes to Pasadena to choose up his children from faculty. He lives together with his spouse, entrepreneur Jessica Jackley, and their 4 kids in Highland Park. Regardless of any threats, he’s shifting away from his standing as a public determine today, planning to give attention to nonfiction writing. And at 50, he has determined to place that MFA in inventive writing to work on a sci-fi collection he simply offered to Netflix.

However he’s not turning his again on the fierce advocacy that has pushed his profession (and sometimes sidelined it). “I’m not saying Americans need to grab a rifle and go fight,” he says, alluding to Baskerville. “But we need to make sure we elevate the cries of the people in Iran, that we keep it in the news and make sure the Iranian government understands there will be consequences to horrific repression.”

Baskerville died inside weeks of becoming a member of the combat for democracy. He was 24.

“I think freedom is the will of God,” Aslan says. “There’s nothing unique about America or white people or Christians that makes them more deserving of a say in the choices that run their lives. All people deserve those things. I think that’s something Baskerville truly understood: the responsibility that we in America have to those who are fighting for rights we take for granted.”