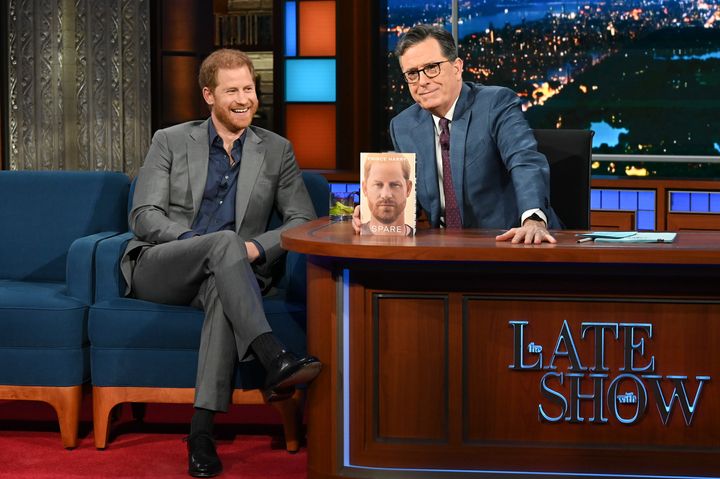 Prince Harry stopped by “The Late Show” with Stephen Colbert this week, the place the 2 spoke concerning the royal’s new memoir, “Spare,” which was launched Tuesday.

Throughout his look on Tuesday’s present, Harry slammed the “most dangerous lie” to return from copies of his ebook being leaked days forward of its publication date.

The prince denied stories that he “somehow boasted about the number of people that I killed in Afghanistan” after some articles pulled quotes concerning the prince killing 25 individuals in fight.

“If I heard anyone boasting about that kind of thing, I would be angry. But it’s a lie,” the royal mentioned. “And hopefully now that the book is out, people will be able to see the context. It’s really troubling and very disturbing that they can get away with it. They had the context. It wasn’t like, ‘Here’s just one line.’”

“My words are not dangerous,” Prince Harry defined, “but the spin of my words are very dangerous.”

“Without a doubt, the most dangerous lie that they have told, is that I somehow boasted about the number of people I killed in Afghanistan.” — Prince Harry tells #Colbert, including that his “words are not dangerous,” however the spin on his “words are very dangerous.” #Spare pic.twitter.com/FnjEZ0QnQl

When the late-night host requested if it was “dangerous” as a result of Harry was now an “increased target,” the Duke of Sussex answered, “And that is a choice that they’ve made.”

Harry defined to Colbert that “the reason why I decided to share this in my book” was to “reduce the number of suicides” within the soldier and veteran communities.

“I made a choice to share it because having spent nearly two decades working with veterans all around the world, I think the most important thing is to be honest and to be able to give space to others to be able to share their experiences without any shame.”

Within the ebook, Harry writes concerning the killings and says, “It wasn’t a number that gave me any satisfaction. But neither was it a number that made me feel ashamed.”

“Naturally, I’d have preferred not to have that number on my military CV, on my mind, but by the same token I’d have preferred to live in a world in which there was no Taliban, a world without war,” he defined. “Even for an occasional practitioner of magical thinking like me, however, some realities just can’t be changed.”

The late-night host informed audiences he’d learn Harry’s memoir, “Spare,” which he joked was obtainable on each “audiobook and a commemorative plate.”

“It’s very enjoyable, quite emotional, quite revealing. I’m going to have so much to talk about with His Harryness,” Colbert quipped.

Colbert is the Duke of Sussex’s final scheduled media look in the meanwhile.

The royal additionally did interviews with Tom Bradby of ITV and CNN’s Anderson Cooper for “60 Minutes” on Sunday, adopted by a sit-down with Michael Strahan on ABC’s “Good Morning America” on Monday.