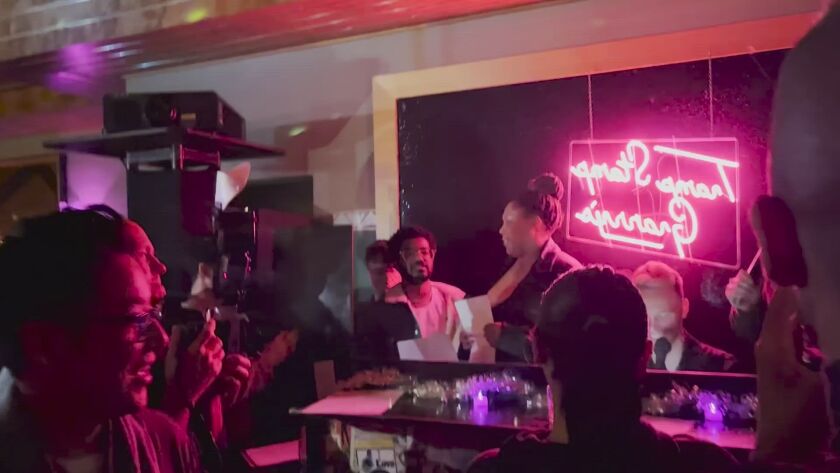 What occurs while you get Broadway singers and Emmy-, Grammy-, Oscar- and Tony-winning songwriters in a room with a piano throughout awards season? Singalongs. A number of them.

Diane Warren joined in Wednesday night time in Hollywood as “Glee’s” Darren Criss and a crowd of music lovers belted out her Oscar-nominated “Armageddon” ballad “I Don’t Wanna Miss a Thing.”

David Foster tickled the ivories with a medley of his personal best hits — together with his Whitney Houston showstopper “I Have Nothing” from “The Bodyguard,” Oscar-nominated for greatest tune in 1993. “RRR” composer M.M. Keeravani, who took house a historic Golden Globe the night time earlier than for “Naatu Naatu,” made an early look.

As soon as the music started on the bash — for Benj Pasek and Justin Paul‘s 2023 Oscar-hopeful tune “Good Afternoon,” from the Apple Original Films musical “Spirited” — it didn’t cease. Hosted by Darren and Mia Criss at their piano bar Tramp Stamp Granny’s, the FYC occasion kicked off with a efficiency of Pasek and Paul’s “Good Afternoon,” from the Ryan Reynolds-Will Ferrell “Christmas Carol” retelling, with a Golden Globes-inspired twist.

“In the movie, the phrase ‘good afternoon’ is the Dickensian way of saying ‘f— you,’ ” mentioned Pasek, joined by Paul and co-writers Sukari Jones, Mark Sonnenblick and Khiyon Hursey. “But tonight we’re going to enlist all of you to say it with us.”

New lyrics for the night time took intention on the current L.A. rain, COVID-19, Elon Musk, the HFPA’s try at a public picture makeover, the reference to The Slap that Eddie Murphy delivered on the Globes the night time earlier than (“Good afternoon, just shout it out/like Jada’s name please keep it in your mouth”) and people chargeable for the 2017 Oscars snafu that mistakenly awarded “La La Land” greatest image as a substitute of “Moonlight.”

“Good Afternoon” is amongst 15 songs that made the Oscar shortlist, together with entries from LCD Soundsystem (“White Noise” from “White Noise”), Alexandre Desplat (“Ciao Papa” from “Guillermo del Toro’s Pinocchio”) and Warren (“Applause” from “Tell It Like a Woman”).

Additionally bringing pop star energy to the class this 12 months are Girl Gaga (“Hold My Hand” from “Top Gun: Maverick”), Rihanna (“Lift Me Up” from “Black Panther: Wakanda Forever”), the Weeknd (“Nothing Is Lost (You Give Me Strength” from “Avatar: The Way of Water”), Taylor Swift (“Carolina” from “Where the Crawdads Sing”) and Selena Gomez (“My Mind & Me” from “Selena Gomez: My Mind & Me”).

Songwriting duo Pasek and Paul, who gained the Oscar for his or her “La La Land” tune “City of Stars,” went on to steer singalongs of their hits from “Dear Evan Hansen” and “The Greatest Showman” with Criss on the microphone.

Oscars nominations voting is underway via Jan. 17. Nominations shall be introduced Jan. 24.