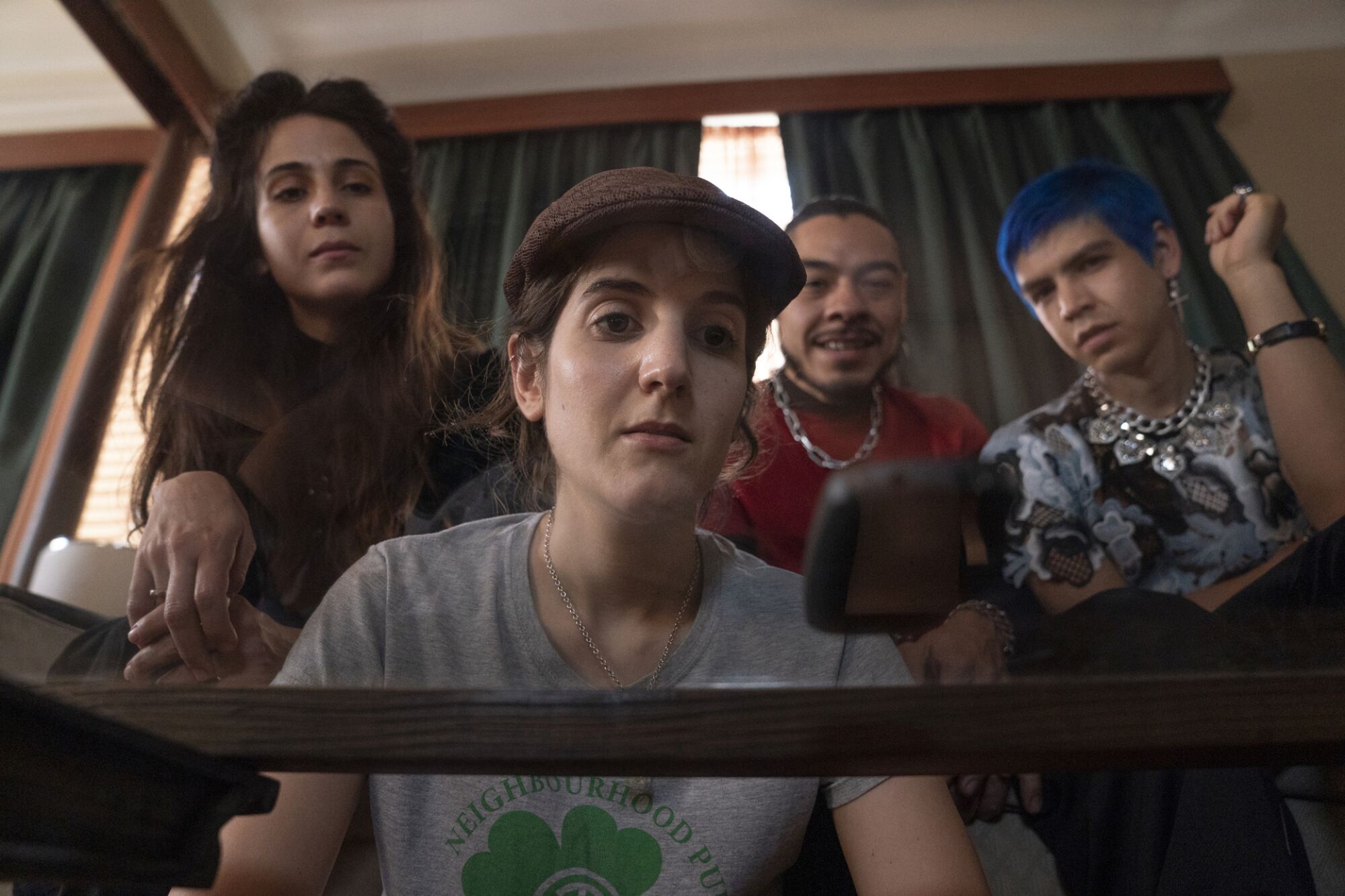 Often there comes alongside a cultural artifact so peculiar that enough vocabulary doesn’t but exist to explain it. That was actually the case with HBO’s “Los Espookys,” a program whose narratives so successfully eschewed Hollywood conference that even its authors had a troublesome time arising with an elevator pitch.

On an interview on “The Tonight Show” in September, co-creator Ana Fabrega glossed it as “a show about a group of friends who have a business where they stage different types of stunts to people who need it.” Fellow co-creator, comic Julio Torres, defined on NPR that the buddies stay in “a made-up Latin American country” and “create false, supernatural and horror experiences.” When confronted with the inevitable what-is-it-about query on “Late Night With Seth Myers,” comic Fred Armisen, who first laid the groundwork with HBO for the collection, stumbled a bit, then mentioned it was about buddies who “get hired to fool people and scare people.”

That is all a bit like saying Shakespeare’s “Julius Caesar” is a play about governance. Not technically incorrect, however hardly the complete image.

Watching “Los Espookys” was like slipping down a rabbit gap of the Latin American weird: a preposterous fusion of deadpan absurdity, slapstick comedy, telenovela plot twists and Goth aesthetics infused with the surreal and the supernatural. The present was so stubbornly unclassifiable that it seems that HBO didn’t fairly know what to do with it. On Friday, Deadline reported that “Los Espookys” had been canceled after two seasons.

That’s too unhealthy. As a result of the present was singular within the tales it instructed and the methods it instructed them — actively undermining each Hollywood trope about Latinos. As an alternative of hackneyed plots about gangbangers and maids, “Los Espookys” delivered tales impressed by the Latin American ardour for the paranormal — and it did it with panache.

One character contended with a parasitic demon; one other rewrote”Don Quixote” word for word. One subplot centered on the brainwashed anchor of a show in the style of “Alarma TV,” the sensationalist news programs typical of Spanish-language television (stories of lurid crimes and improbable monsters related with grave seriousness by beautiful women in tight dresses). And let’s not forget the U.S. Ambassador, imagined as a blonde party girl who worked in a Barbie-pink embassy and hoped to one day become ambassador to Miami so she could take “weird meetings with conservative Latins.”

Imagine “Scooby Doo” as written by Jorge Luis Borges and directed by Pedro Almodovar and you can begin to approximate the vibe.

“Los Espookys” was impossible to describe because it had no equivalent. The show wasn’t trying to play straight macabre, nor did it fit neatly into the sitcom mold (either U.S. or Latin American). Instead, it seemed content to inhabit a netherworld in between.

Its closest U.S. cousins might be FX’s vampire comedy “What We Do in the Shadows,” which wraps supernatural themes around a mockumentary structure, and Netflix’s “Wednesday,” which reboots the ooky-spooky Addams Family franchise with a largely Latino cast.

“Espookys,” however, was not an American comedy with a Latino veneer. The show’s architecture draws directly from the conventions of Latin American storytelling, including surrealist literature and rural folklore. The characters inhabited an unnamed place where magic is an unquestioned part of everyday life, where the grotesque informs culture as much as anything beamed in from the U.S., where the humor is deadpan in the face of violence and death.

Inhabiting this fantastic universe were the four Espookys: Renaldo (played by Bernardo Velasco), a congenial chico dark (a.k.a. Goth) who is obsessed with horror movies and a puffy lapdog named Frutsi; Úrsula (Cassandra Ciangherotti), a former dental assistant who is the most practical (least impractical?) of the bunch, rolling her eyes at machismo and making sure everybody gets paid; Andrés (Torres in a range of deeply saturated blue ensembles), the glamorous, otherworldly heir to a chocolate fortune; and the dingbat Tati (Fabrega) who is constantly trying on new personas while holding down multiple improbable jobs — such as manually turning the second hand on a broken tower clock.

Making regular appearances was Armisen as Renaldo’s L.A.-based Tío Tico, renowned in the family as a car parking prodigy.

Together, Los Espookys plied their highly unusual trade: creating “experiences” for a range of corrupt, demented and self-interested clients, which might involve faking an eclipse or haunting a cemetery. Or, maybe, creating a cuddly rabbit-alien named Bibi’s (embodied by Renaldo) who emerges from a giant egg and acts out an internal hemorrhage, teaching a classroom of unruly children a valuable lesson. (The humor may was dark, but the show was never scary, and their contraptions were always comically DIY.)

Often, the best moments were in the throwaway lines. One of the running gags in the second season had Renaldo suffering from bouts of insomnia, seeing apparitions of a brutally murdered beauty pageant contestant. Hoping a night of restful sleep will take care of the problem, his pal Andrés reaches for a tackle box full of pills. “This one is if your shadow escapes,” he says, admiring a capsule. “This one is for when you get a headache after seeing through a lot of crow’s eyes at the same time. And this one is to sleep.”

The subplots, likewise, were sublimely absurd. In one flashback, a young Úrsula goes before a judge of the Real Academia Española (akin to Spain’s version of the Oxford English dictionary) to argue about the role of the double el — like the “ll” of llama — in the Spanish alphabet. The chamber she visits is, aesthetically, straight out of the Spanish Inquisition. In another, Andrés is disowned by his parents and becomes a model in a staircase showroom — but is quickly carried away by a kindly millionaire who takes him home as a substitute parent for his two children (and a lover for himself). Imagine the cinematic language of a ‘70s hustler flick meeting a telenovela plot about an evil stepmother.

If all of this sounds ludicrous, you haven’t spent time in the stranger recesses of the Latin American imagination. A couple of weeks back, during a night of endless scrolling on Instagram, I came across a post by the Mexican daily Milenio that featured Platanito, a famous TV clown, apologizing for making an off-color joke about a murdered woman — while decked out in full clown makeup.

“Los Espookys” was not a great show. At times, the gags felt more like a pile-on of one-liners than a cohesive story about characters.

Tati, for example, was so lacking in self-awareness that, at times, she came off as a malfunctioning robot. In the ‘70s-era Mexican TV comedy, “El Chavo del Ocho” — to which “Los Espookys” owes some of its slapstick sensibility — the titular Chavo was an orphan who lived in a barrel (and was played by a middle-aged actor, Roberto Gómez Bolaños). Chavo was a knuckled-headed naif, but he also punctured others’ self-importance in ways that gave him a modicum of power. It’d be great if goofy Tati, one of the more fantastically weird characters on television, could have been given more agency to articulate the truths that others can’t or won’t see.

But in its two short seasons, the show achieved a lot. “Los Espookys” embodied the Latino without being hampered by Hollywood’s blinkered vision of Latino life. Filmed largely in Spanish, it contained not a lick of expository dialogue. If you didn’t get the jokes about the Spanish alphabet, too bad. Nor was it obsessed with well-trod story lines about immigration. In the first season, Tío Tico finagles a movie deal for the crew in L.A., but most of them decline to join him as they are too busy with projects at home.

“Los Espookys” gave us us a world in which Latinos existed only in relation to themselves, not as satellites orbiting the United States — and that felt revelatory.

The second season, which launched in September (after considerable pandemic delays), saw the writing growing sharper, the plots wilder and more literary. Which makes the cancelation sting all the more. I was hoping a third season might bring more narrative polish. (I was also hoping to learn what Tati carried around in her mysterious little bag.)

“Los Espookys” broke the narrative mold. Here’s hoping its too-brief existence will inspire more creators to break it again, and in different ways. I’m here for programming that dips into the uncanny — and especially for more Latino storytelling that refuses to stay within lines.