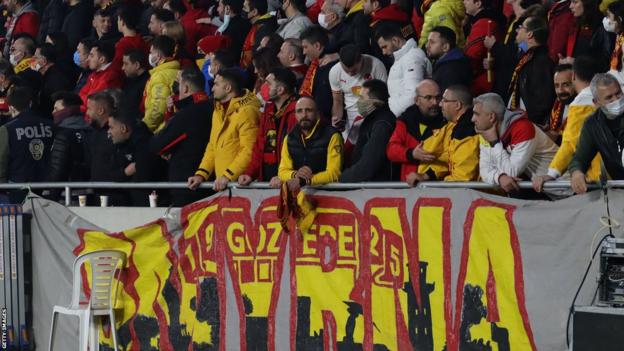 A goalkeeper was attacked by a fan with a nook flag throughout a derby between Turkish second division sides Goztepe and Altay in Izmir.

The sport on Sunday was deserted halfway via the primary half, with ambulances wanted on pitch after followers threw fireworks and flares.

After the sport was stopped, a supporter ran on pitch and attacked Altay keeper Ozan Evrim Ozenc with a nook flag.

In a press release, the TFF additionally condemned “the dastardly attack” on Ozenc.

After ambulances arrived on pitch to deal with followers injured by fireworks, movies on social media confirmed a supporter working throughout the pitch and attacking Ozenc from behind, earlier than being restrained by gamers and safety employees.