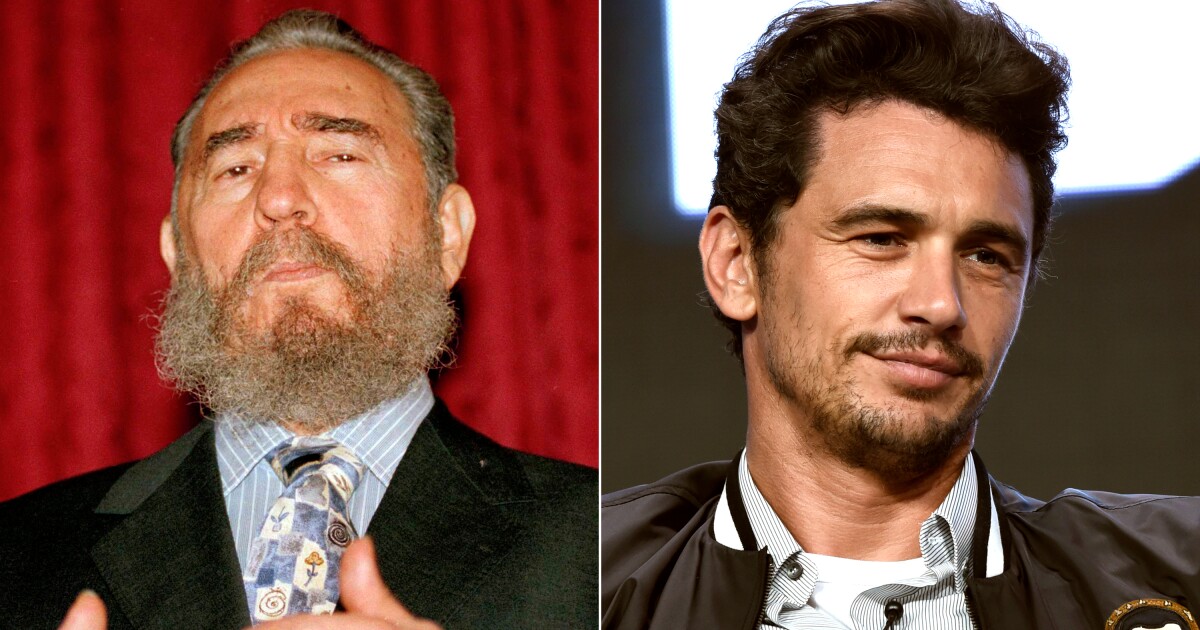 In Hollywood, reality is stranger than fiction.

On Thursday, Deadline introduced that James Franco, he of “Pineapple Express” and “This Is the End,” had been solid as Cuban dictator Fidel Castro in “Alina of Cuba,” a biopic impressed by the lifetime of his estranged daughter, Alina Fernández.

On Friday, after the casting of a white U.S. actor within the position of a distinguished Latin American political determine had drawn widespread condemnation on-line (together with some very pointed criticism from actor John Leguizamo), one of many movie’s producers got here forth with an evidence.

“[W]e used Fidel Castro’s ancient Galician heraldry as our focal compass, and then combed through the entire ranks of actors with Latin roots in Hollywood to find someone who has a similar facial structure,” said producer John Martinez O’Felan in a statement.

“In executing a close search into our hopefuls through the eye of Spanish and Portuguese genealogy which the Galicians held, we found that James, by far, had the closest facial likeness of our industry’s leading actors, meaning that the focus would be to build out his character accent and we’d have a stunning on-screen match to intrigue audiences and bring the story to life with true visual integrity.”

No, I am not quoting the Onion. That is a real statement from the film’s producer.

Those involved with the project have taken great pains to point out that the film features Latino actors in other roles, including Cuban Salvadoran Ana Villafañe in the title role of Fernández and Argentinean Mía Maestro as Natalia “Naty” Revuelta, Fernández’s mother. On Saturday, Fernández herself expressed support for the decision to cast Franco. As she told Deadline: “James Franco has an obvious physical resemblance with Fidel Castro, besides his skills and charisma.”

Never mind that Franco’s casting does nothing for Latino representation in U.S. film, which is generally atrocious. Never mind that this contributes to an ongoing erasure of Latinos in U.S. popular culture. Never mind that studios spent the months following the 2020 uprisings talking about “pipelines” and “inclusion” only to serve up Franco (who, it’s also worth noting, has faced allegations of bad behavior from multiple female colleagues and students). Never mind that Latino audiences in the U.S. are continuously subjected to terrible on-screen Spanish. Never mind the convoluted DNA-speak about “Galician heraldry.”

Is James Franco, a guy who generally has the demeanor of someone who’s been dipping into Pineapple Express, really the best guy to portray a caffeinated Cuban dictator? A leader who, regardless of what you may have thought of his politics, was a magnetic orator who holds the record for longest speech before the United Nations General Assembly between 1945 and 1976?

Did some producer really watch footage of Castro’s 4½-hour marathon speech, whose transcript comes to 40 single-spaced letter-sized pages if printed, and say to themselves: what if we got that guy who could barely host an Oscars telecast? And then, when people asked why this plum role — of perhaps the most prominent Latin American leader of the 20th century — couldn’t maybe go to a Latino actor, respond by producing a statement that reads like the end user license agreement for 23andMe?

In that popular musical, a pair of Broadway moneymen try to enrich themselves by intentionally producing a Broadway flop. Which got me thinking…

Why just whitewash the role of Fidel Castro? Why not create the most whitewashed, un-Cuban-est version of “Alina of Cuba” — a “House of the Spirits” for the new millennium, a “Perez Family” for the internet age ? If you’re going to whitewash, GO ALL THE WAY. Make it so awkward and unbearable that people will remember it with the same embarrassed wonder they generally reserve for that hot tub sex scene in “Showgirls.”

Inspired by what is obviously an incredible, moneymaking idea, I called up Rosa Lowinger, the Cuban-born, L.A.-based author of “Tropicana Nights: The Life and Times of the Legendary Cuban Nightclub.” Together, we cast a whole new picture that people will be talking about for decades. Our working title: “Springtime for Castro.”

Fidel Castro: Played by James Franco, obvi. He has the scraggly beard. And, as we’ve already established, his ancestors hail from the same 4 million-square-mile continent as Castro’s. Franco will have to work to “build out” his accent, but he’ll get bonus points from us if he mangles the ‘r’ in ¡compañero! — a.k.a. “comrade” in Cuban. That will be part of the film’s charm.

Ernesto “Che” Guevara: Seth Rogen is our shoo-in for the Argentinean revolutionary, of course. He could even do a “Motorcycle Diaries” prequel. I mean, the GIFs already exist.

Fulgencio Batista: The role of the Cuban dictator whom Castro toppled goes to Nathan Lane channeling his best Gomez from “The Addams Family” musical. Also, he was pretty great in “The Producers.”

Camilo Cienfuegos: Cienfuegos was the hottest of Fidel’s compañeros, known for his love of the dance floor and the ladies. He was presumed dead after a plane crash at sea in the revolution’s early days, before the regime had ossified into autocratic rule. A martyr taken too soon? Or is Cienfuegos secretly living in Las Vegas? Either way, it’s the ideal role for Adam Driver.

Naty Revuelta: The socialite who sold off her jewels to support the barbudos (the bearded ones) in their earliest days, even sewing uniforms for them, Revuelta was known as “one of the most exquisitely beautiful women in Cuba.” She had an affair with Castro in the 1950s (while he was still married to his wife, Mirta Díaz-Balart) and that union produced a daughter, Alina. The Revuelta character couldn’t be more suited to Catherine Zeta-Jones. It would be a perfect marriage of two previous roles the Welsh performer has inhabited: the wily heroine of “Zorro” and the ruthless drug lord in Lifetime’s “Cocaine Godmother.”

Alina Fernández: Long estranged from her father (Castro only belatedly recognized her as his daughter), Fernández famously fled Cuba in her 30s disguised as a Spanish tourist and later became an outspoken anti-communist activist. Zooey Deschanel is the perfect fit. Both she and Alina share brown hair DNA.

Ruby Hart Phillips: She’s the New York Times reporter who covered the Cuban Revolution in its earliest days. We’re gonna go with Nicole Kidman, because this is obviously an ensemble picture with lots of star power. But as part of the narrative, she sleeps with a revolutionary, because in Hollywoodland, that’s the sort of thing female journalists do.

CIA Agent: Every movie set amid a revolution in Latin America needs a CIA agent. We nominate Vin Diesel since he acquitted himself nicely racing cars all over Havana’s Malecón in “The Fate of the Furious.” More importantly, this will draw action fans to this important historical drama.

If you are a Hollywood producer and would like to option what promises to be a poignant piece of cinematic history, please get in touch with The Times’ rights and clearances department. Our lawyers are standing by.