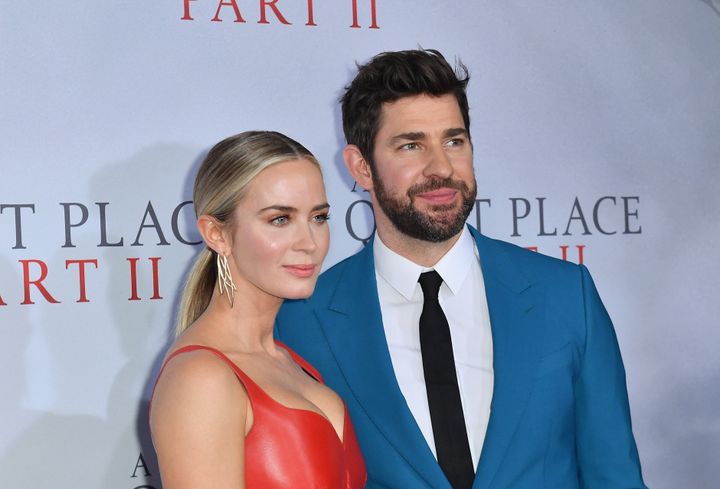 Emily Blunt will endlessly be grateful that her husband, John Krasinski, was in a position to overlook what she describes as a momentary lapse in trend judgment.

The British actor dropped by “The Late Show with Stephen Colbert” Wednesday to advertise her new collection, “The English.” Throughout the “Colbert Questionert” section of the interview, she was requested to call one merchandise she owned that she ought to actually throw out.

“A really terrible, old, royal blue velvet jacket,” Blunt replied. “I don’t wear it, but I wore it on John and I’s first date, and I have not thrown it out. It’s such an awful jacket. I sit there, and I go: ‘That is a terrible jacket.’”

The “Devil Wears Prada” and “Quiet Place” star went on to jokingly declare that Krasinski gave her an ultimatum when it got here to her supposedly less-than-chic first date ensemble.

“He just sent me a memo going: ‘Don’t wear the jacket, and you’ll get another date,’” she quipped.

Although Blunt didn’t say precisely when this date occurred, she and Krasinski have been married since 2010. The couple share daughters Hazel, 8, and Violet, 6.

It isn’t the primary time Blunt has shared some quirky perception into the early days of her relationship with Krasinski. Showing on iHeartMedia’s River Cafe Desk 4 podcast final 12 months, she advised Krasinski proposed to her solely after she’d ready Meals Community star Ina Garten’s roast hen recipe, which is broadly known as “engagement chicken.”

It was solely after Blunt served the “oniony, garlicky” dish to Krasinski that she felt assured she’d gained his coronary heart.

Watch Emily Blunt on “The Late Show with Stephen Colbert” under.