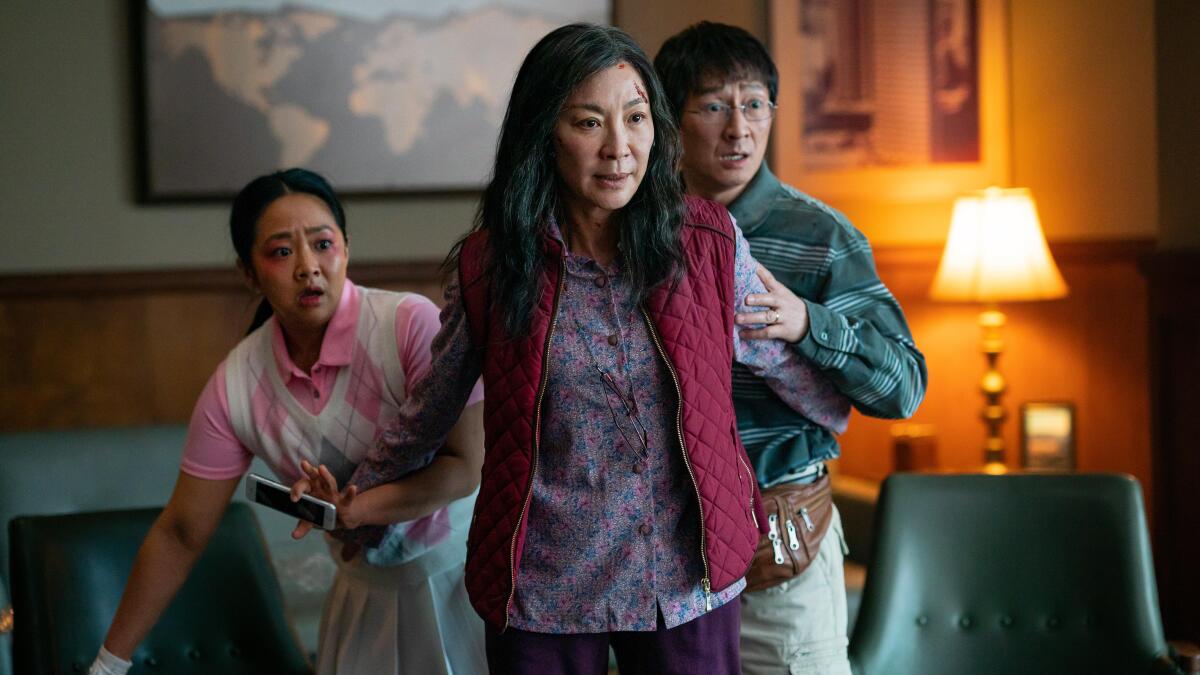 Talking of sharing: Within the group’s first 12 months with gender-neutral appearing classes, the L.A. critics additionally honored Invoice Nighy (“Living”) for lead efficiency and Dolly de Leon (“Triangle of Sadness”) for supporting efficiency. “EO,” Jerzy Skolimowski’s movie concerning the laborious, harrowing lifetime of a donkey, was named finest movie not within the English language, whereas “All the Beauty and the Bloodshed,” Laura Poitras’ portrait of the artist and activist Nan Goldin, was named finest documentary/nonfiction movie. “Guillermo del Toro’s Pinocchio,” which Del Toro directed with Mark Gustafson, was the group’s alternative for finest animation.

GLENN WHIPP: Voting at present, Justin, it was laborious not to consider all of the scorn and misery — to not point out full of life dialogue — concerning the current unveiling of the decennial Sight & Sound Critics ballot, significantly the response to the selection of Chantal Akerman’s extraordinary and influential “Jeanne Dielman” as the best movie of all time. Conspiracy theories pinged round social media. Filmmaker Paul Schrader wrote that “it feels off, as if someone had put their thumbs on the scale.” Certain … or maybe 10 years after the final poll, there’s a rising defiance towards the canon and this 12 months’s voters — which embrace many extra girls and folks of shade — have their very own subjective concepts about what constitutes a landmark movie.

Parsing the Sight & Sound listing will be maddening and ridiculous … and enjoyable! Lists rating artwork provoke all these responses — and make individuals curious to find nice films. For the L.A. Film Critics vote, we make 13 lists, rating our prime three favorites in every class, save for the lead and supporting appearing classes, the place we rank 5. (Extra on that later.) The ultimate decisions are generally unattainable. My second 12 months within the group, the lead actress finalists had been Julia Roberts for “Erin Brockovich” and Laura Linney for “You Can Count on Me.” I needed to increase my hand for certainly one of them. I selected Roberts. She received by one vote. Absurd!

However I stand by that alternative, and I assist (settle for?) what we did as a bunch at present, even when certainly one of my favourite movies of the 12 months, Park Chan-wook’s “Vertigo”-tinged detective story “Decision to Leave,” came away with nothing, despite placing high in just about every category in which we voted.

May I have at some point in the day sent you a text suggesting that perhaps we had given Field’s knockout character study “Tár” enough prizes? Yes. Yes, I did. And then, shortly afterward, the movie won our best picture … but shared that award with the trippy, multiverse-hopping “Everything Everywhere All at Once,” a delightful wrinkle in our voting that satisfied my hope that we’d spread the love around a bit more.

It was the fourth time in the group’s history that we’ve had a best picture tie, and the previous deadlocks — “Dog Day Afternoon” and “One Flew Over the Cuckoo’s Nest” in 1975, “Network” and “Rocky” the following year and “Gravity” and “Her” in 2013 — reflect a collective desire to celebrate all kinds of movies and affirm that great cinema comes in many, many different forms. I think we did that again today, Justin, even if you ignored that message I sent you.

JUSTIN CHANG: Now, Glenn, when have I ever ignored you, especially during a critics’ group meeting? (Don’t answer that.) When Field was up for best director, I did happily throw my support behind S.S. Rajamouli, our runner-up for his thrilling action-musical extravaganza “RRR”; he was also the New York Film Critics Circle’s choice for best director last week. Dare I suggest that if our East Coast colleagues hadn’t already hailed Rajamouli, he might have stood a better chance with us? Maybe, maybe not. I will note that the somewhat similar-sounding “Tár” and “RRR” made for some of the more confusing vote reads of the day. Also, I would like to hear Lydia Tár conduct the Berlin Philarmonic in a performance of “RRR’s” glorious signature number, “Naatu Naatu,” which helped push composer M.M. Keeravani to a win in our music/score category.

Like you, I love it when the group spreads the love around a bit, and for the most part we did. I would have liked to see another prize or two go to Charlotte Wells’ piercing memory piece, “Aftersun,” but was pleased to see Blair McClendon’s exquisite, multilayered cutting earn our editing prize — and over “Tár,” no less. At the same time, nearly every time “Tár” was up against something else, I was hard-pressed to vote for the alternate. Not for Martin McDonagh’s sharp “Banshees of Inisherin” script, our runner-up for best screenplay, and sorry, but not against “Everything Everywhere All at Once,” though clearly the Daniels’ head-spinning marvel (but not Marvel) of a multiverse thriller proved popular enough with our colleagues to even the score in best picture.

Funnily enough, the one category where I was expecting a tie between “Tár” and “Everything Everywhere” was in our lead performance category, where Cate Blanchett and Michelle Yeoh were unsurprisingly neck-and-neck for much of the early voting. To pick up a topic you mentioned earlier, Glenn, this is the first year that LAFCA opted to present gender-neutral acting prizes, with two lead performance winners and two supporting performance winners. And so instead of casting three individual choices for best actor and best actress, all of us got to cast five individual choices in a gender-neutral lead category and a gender-neutral supporting category. Just imagine, Glenn, if this system had been in place back in 2000; both Linney and Roberts might’ve won!

And I’ll admit, I was hoping we’d honor two women lead performers this year, especially since 2022 was a particularly exceptional year for them. Our own results bear that out, given the huge support for performers like “Till’s” Danielle Deadwyler (Yeoh’s fellow runner-up for lead performance), Park Ji-Min for “Return to Seoul,” Mia Goth for “Pearl,” Emma Thompson for “Good Luck to You, Leo Grande,” Tilda Swinton for her ghostly dual performances in “The Eternal Daughter” and Ana de Armas for her impressive incarnation of Marilyn Monroe in the otherwise critically reviled “Blonde.” But in the end, Nighy’s beautiful performance in Oliver Hermanus’ “Living,” an exquisite English-language remake of Akira Kurosawa’s “Ikiru,” prevailed alongside the clearly undeniable Blanchett.

And there was gender parity in our supporting performance awards, too, starting with the runner-up mentions for Brian Tyree Henry, so subtly commanding in “Causeway,” and Jessie Buckley, the moving standout of “Women Talking’s” faultless, predominantly female ensemble. As for the winners, it was surely no surprise to anyone that Ke Huy Quan picked up another prize for his nimble, much-laureled work in “Everything Everywhere.” But I do hope our other supporting winner, the sensational Dolly de Leon, encourages more moviegoers to check out “Triangle of Sadness” — not your favorite movie, I know, Glenn. But I’m going to ignore that, too.

WHIPP: De Leon might be the MVP of the movie season for saving that movie in its final act. I’d suffer through its superficial satire again just to get to the part where she takes charge. And I’m so glad that we pointed the way for audiences to find “Living” when it begins arriving in theaters later this month. Nighy’s work in the movie is a master class in understatement that had me in tears by the end. “Living” received strong support in several categories — screenplay, score, direction — and its story of late-life redemption would make for a fine substitute for anyone who has seen “A Christmas Carol” one too many times. If you only know Nighy from “Love Actually” (bah humbug to you!), his work here is going to be a revelation.

I know we both went into the proceedings curious about how voting in the combined, gender-neutral acting categories would play out. In the end, there was very little drama surrounding the decision the group made earlier this year. As I suggested earlier, it is a fool’s errand to pick the “best.” In lead I voted for Nighy. I also voted for Austin Butler’s electrifying Elvis, Deadwyler’s deeply felt Mamie Till-Mobley, Tang Wei’s sad swoon in “Decision to Leave” and Goth’s gonzo, pitchfork-powered work in Ti West’s unsettling “Pearl.” (Goth was equally in good in dual roles in West’s “X” too.)

Nighy might have been my favorite, but who could begrudge rewarding any of these performances? And, more to the point, who needs binary divisions of gender? You’re right, Justin: I would have voted for both Roberts and Linney in 2000 ahead of Michael Douglas for “The Wonder Boys.”

CHANG: I’ll see your Roberts and Linney and raise you Gillian Anderson for “The House of Mirth” and Björk for “Dancer in the Dark.” But back to 2022: There is indeed something liberating about voting for actors — and allowing actors to compete with each other — without treating gender as a criterion. And yet few would argue that gender is immaterial to the movies we voted for on Sunday, so many of which tell stories about women and men navigating a profoundly unequal world.

Seen in this light, perhaps the best picture tie between “Tár” and “Everything Everywhere All at Once” feels all the more fitting. The former is about a woman who has risen to the highest echelons of success in a male-dominated industry, only to slowly fall from her rarefied perch; the latter is about a woman who regards herself as a profound failure, only to gradually realize she’s anything but. Both use their female superstars, Blanchett and Yeoh, to comment slyly on how women deal with blinkered assumptions and expectations of their success in the modern world.

Concerns of gender are essential to Sarah Polley’s fiercely spectacular “Women Talking,” which, regardless of not successful any prizes outright, drew widespread assist within the image, director, screenplay and naturally appearing classes. They usually’re hardly irrelevant to our prime documentary, “All the Beauty and the Bloodshed,” Laura Poitras’ excellent movie about Nan Goldin, who has lengthy made gender politics, and particularly the idea of gender fluidity, central to her pioneering work. I’d be remiss to not point out “Saint Omer,” Alice Diop’s haunting courtroom drama a few Senegalese French girl on trial for the homicide of her child daughter — a searing disquisition on how Black immigrant girls are handled in a society that each one however denies their existence. It was one of many most-loved films in our LAFCA Zoom room, and likewise our runner-up for finest movie not within the English language.

The winner in that class was “EO,” a beautiful, gutting story a few donkey (deliberate shades of Robert Bresson’s “Au Hasard Balthazar”), stunningly nicely directed by the 84-year-old Polish director Jerzy Skolimowski. Other than our greatest image winners, “EO” was the one film to win multiple award on Sunday; it additionally was acknowledged for Michal Dymek’s cinematography. This group’s wide-ranging appreciation for world cinema has lengthy been probably the greatest issues about it, which is why I do know a variety of prognosticators had been anticipating “RRR” to fare even higher with us than it finally did, and why I share your disappointment, Glenn, that Park Chan-wook narrowly missed a director placement for “Decision to Leave.” It deserved extra from us — however then, in a 12 months of so many sensible ignored films, it’s in wonderful firm.